Commercial property: while in a deficit

On the commercial real estate market for 8 months of this year put into operation a total of 8 000 sq. m. under construction now is about 675 000 sq. m.

The desire of many Ukrainian developers to build the largest commercial (TC) or shopping center (Mall), broken about the realities of the market. To fill such colossus quickly to earn as soon as possible, it is very difficult. Practice has shown that filling large shopping center, such as, for example, the Lavina Mall, required a lot of effort and time.

It is not surprising that the fashion for gigantism on the commercial real estate market is. Director of international company M+A Global Architects (USA) Edward Khodorkovsky, at the event in Kiev, said that the priorities of developers shifted from large-scale objects towards a small neighbourhood shopping centers and regional formats with an area of 10-15, 000 sq m. the Design and concept of these projects should leave room for maneuver, so they can adapt to modern economic conditions.

According to Khodorkovsky, the master plan of the shopping center to do the maximum "flexibility". In this case, developers will be able to carry out the project in stages, and make adjustments to build in accordance with the funding and use of the building structure, which will allow in future to easily modify and expand the project. 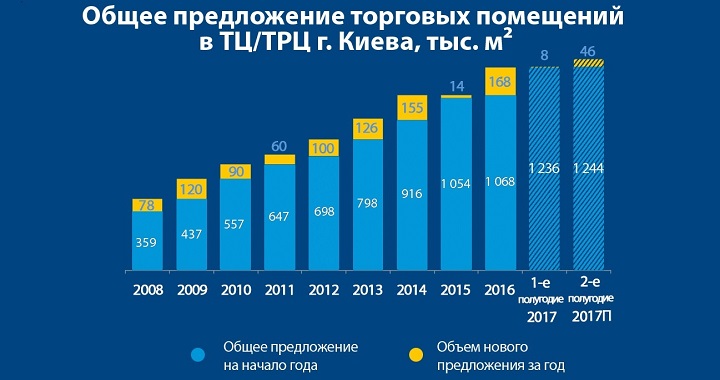 According to the Ukrainian konsalterov, currently in Kiev, built 4 shopping centers near subway stations and 7 objects near the end of the light rail stations.

"Our specialists for several years is used in the design concept the principles of the phased introduction into service and backup areas for further development of shopping malls. It is an international trend in recent years", — said the President of UTG Vadim fidgets.

For the first time in four years, the demand for new retail space is seriously oversubscribed. On the commercial real estate market for 8 months of current year has opened a total of 8 000 sq. m.

All high quality retail space in Kiev is almost 100% absorbed by the market. The confirmation of declining vacancy rates that fell from 10% in the beginning of the year (including the opening SEC Lavina Mall) to 6% at the end of June 2017. This decrease is caused, including, and minor new offer space this year.

The volume of retail space in Kiev, according to Colliers International(Ukraine) 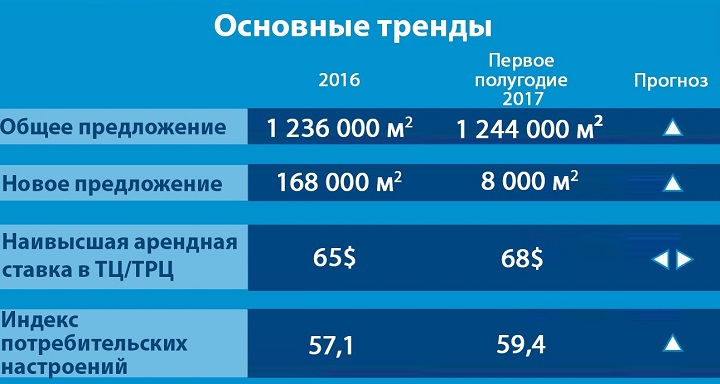 But this situation will not last long. According to statements of developers in 2017-2019 years, the volume of new supply in the retail property market of Kiev will be. Under construction now is about 675 000 sq. m.

In the second half of 2017 it is planned the opening:

Thus, the volume of new supply in the second half of 2017 should amount to 46 000 sq m. However, according to analysts, a significant part of the new proposal can be submitted at a later date. Reasons — lack of funding, the difficult economic situation in the country and high level of corruption in the industry.

At the end of the first half of 2017, higher rents for the section area of 100-150 sq m in the most successful shopping center/Mall in Kiev amounted to $68 sq m/month. Rental rates for vacant space on Kreschatik – the main shopping street of the capital were in the range of $83 sq m/month.

As of now, the average rental rate in Kyiv is $33 per sq m, and objects included in the TOP 10 of the SEC, the cost of renting about $50-60 per sqm (excluding VAT and utility payments. "Earlier if conditions dictate the tenants, there was no concept of average rental rates and massively practiced different agreement, and now the situation will change," — said the Director of UTG Eugene Loktionova.

In her opinion, due to the lack of proposals in the capital, fortunately for owners of retail properties at the end of this year, rents could rise by 20%, and the vacancy rate will decrease to the level of 2014 – about 2%.

The only exception is international companies that settled in Ukraine. The company Colliers International (Ukraine) report that a major international network operators in our market. Despite the seemingly unfavourable situation in the country and relatively low official income of the population, they adapted to new realities, think about development, increase market presence. However, while trying to bargain for the landlord the most favorable conditions, including lower rental rates, rental holidays, advertising privileges, etc.

The developers expect that in 2018-2019 on the retail property market of Kiev, the supply will increase.

In the short term, until the end of 2017, the total vacancy rate in SC/SEC of Kiev will continue to decline, including on the main shopping streets.

Rents, most likely, before the advent of the new shopping center will remain at the same level.