Art-factory "Platform" — additions to "Dorinku" to a successful business Have you noticed that on the weekends the center of Kiev once emptied and another antikafe not crowded with bloggers, designers and journalists? Most likely, they are at the Art factory "Platform", where the next festival. To eat a snail with honey filling, buy vintage dress, a book, a rare edition and to hold a livestream on Instagram with the performance of the young Ukrainian group's Kyiv attracts young people from all over the city to the outskirts of the metro station "Forest".

A bit of history

The main investor of the "Platform" is a company founded by Israeli businessman ofer Kerzner, City Capital Group, which also is the main developer of the market-Mall "Darynok". Investments in Art-the plant amounted to EUR3 million, however, the initial "Platform" was created as a way to attract traffic to the market-Mall "Darynok". As the Director of the "Platform" for marketing and PR Sergei Sokolov, a new impetus for the development of "Platform" received after the revolution 2014. "I wanted to gather somewhere all creative young people in Kiev, to create for them opportunities for self-realization and to show that life abounds" — says Sokolov. The first event at the Art factory was a street food festival, which, incidentally, is older than the "Platform" for the year — festivals were held in 2013 in the Parking lot near the "cosy nest". 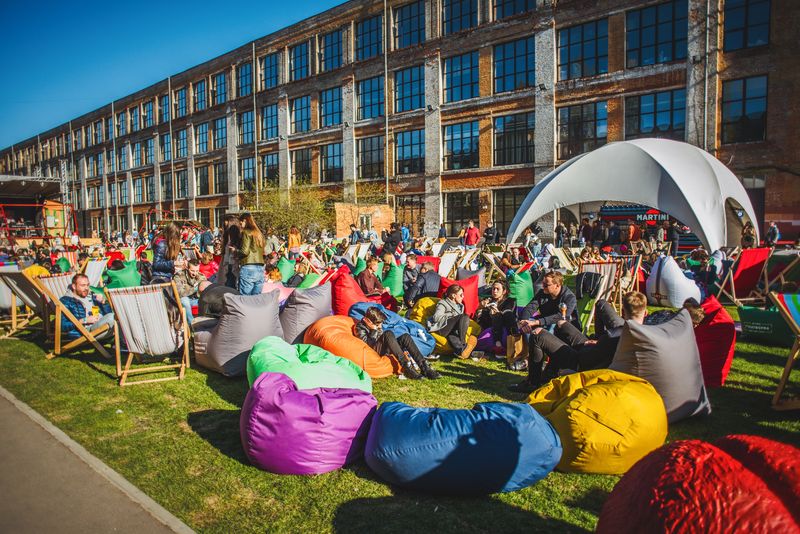 A year on the "Platform" is held 10 festivals street food, including two of the festival "White nights", as well as a 9 flea markets "Courage Bazaar". They are engines of development "Platform". According to the art Director of the "Platform" of the Novel Tugasheva turnover of one of the festival street food is 2.5 million UAH. The main part of income is earned by rent — on-site Art factory held IT conference and festivals, art exhibitions, seminars and workshops. 25 000 sq m the "Platform" is coworking, an annual rental income which can be $5-7 million.

The first years of the Art plant, the target audience were considered representatives of the creative economy: designers, architects, journalists. Over time, the guidelines changed slightly — now the "Platform" is aimed at the family. Most likely, this is due to the fact that the main activity of the Art plant are held on weekends, when young families can come together and have a nice time at the next festival. As said Sergei Sokolov, the average attendance of the Art plant "Platform" over the weekend to 15 000 people, but one of the former tenants said that these figures are often exaggerated. One of the participants of the festival — Director Ulitka Bar Eugene Gontaruk argues that the flow of visitors was formed and is permanent. "Fluctuations, of course, but they are associated in most cases with the weather conditions," says Eugene. Eugene Manzhosova (Manzhosova Patisserie) says that despite the sleepless nights spent on training to the street food festival she's got a second wind and the work goes easily.

Rental price on the "Platform" varies from 5 000 to UAH 150 000 over the two days of the festival, 1 sq. m costs about 800-900 UAH. The cost and terms depend on the brand, which leases the site, and from the private stand, which can also be rented on a "Platform". Spending on rent, as a rule, does not pay it the owners need to rent equipment, to bring him to the Platform, pay for installation and dismantling. A young brand such spending does not pay for the weekend, so they go to festivals not for profit but for the sake of promotion and attracting new customers. "We understand that we are at the Art factory for our promotion to be known more people," says Eugene Manzhosova.

The Creator of Soul Kitchen Maxim Volynets expressed the idea that it would be nice to try new formats in the "Platform", because all festivals and events will sooner or later become commonplace for the Kiev. "Platform" is on the Left Bank of Kiev, and if the center of the city opens up the space, the Art factory may lose some of its visitors.

The art factory and "Darynok"

Nearest neighbor the Art factory "Platform" TC "Darynok" has undergone some changes after the opening of the "Platform". In 2016, "Darynok" was restyled because of a change in its audience over recent years. "Darynok" has to ensure that its tenants had pages in social networks and actively engaged in its promotion. Such a strategy requires a new young audience "cosy nest" created by "Platform". "Today's audience "Vorokhta" and the Art factory do intersect, — says Natalia Kravets, head of Department of trading real estate Colliers International, but "anchor" the area is "Platform".

Art-factory "Platform" — one of the first examples of revitalization of industrial zones in Kiev and Ukraine. "Platform" may be on a par with similar projects in Europe, USA, says Elena Koronotova, managing partner idny, although a good solution for the development of the project would be to load the Art plant on weekdays". The peak load on the Platform during the weekend when the Art factory hosts festivals and concerts. "Examples of such concepts in other countries suggests that it is possible to create constant traffic space. For example, this year we had a chance to study the space PMQ, the revitalized concept in the center of Hong Kong. This multifunctional event venue and co-working and office center, and space for the retail sector-residents with a small show-rooms — a kind of shopping center. In other examples abroad, there are still hotels/hostels in addition to similar locations. These are all functions that you can fill the space," says Elena Koronotova.

Despite the workload only on weekends, with the objective to increase traffic "Vorokhta" the Art factory did a good job. In 2016, 40% of visitors to festivals and exhibitions at the Art factory went to the market Mall. Art-factory "Platform" can be considered not only a good location for work or holding of youth events, but also a great commercial project which has found its place on the map of Kiev.